This is what our once proud military has been reduced to.:  Our armed forces are meant to defend us by killing people and breaking thing–period.:  It’s not supposed to be a Petri dish for social experimentation.:  Amazingly enough this report comes from Stars and Stripes, the military’s storied newspaper.: 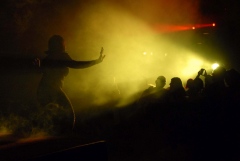 [1]Stars and Stripes[2] reports since the repeal of the Don’t Ask, Don’t Tell policy, U.S. military bases have hosted gay marriage ceremonies and potluck gatherings. But on Saturday, servicemembers here may have been the first to take to the stage and perform as drag queens on a military installation in support of lesbian, gay, bisexual and transgender troops.

Drag queens and drag kings, to be precise.

Six servicemembers – gay, lesbian and straight – donned heavy makeup to dance and lip sync songs such as “I Wanna Dance with Somebody” for a raucous capacity crowd at the Rocker NCO Club at Kadena Air Base. The event was a fundraiser for the recently formed Okinawa chapter of OutServe-SLDN, which is the largest nonprofit advocate for the military’s LGBT community.

“We didn’t think there was much of a desire for an event like this on the island but it has actually blown up,” said Navy Lt. Marissa Greene, co-chapter leader of OutServe Okinawa.

Originally posted by The Last Tradition[4]