Obama’s cousin is a Doctor of Radiology who was stirred up by the heath care mess his distant cousin, President Obama, has created. In an interview he said,” You can’t choose your family, but what you can do is to rise up and stop your family from destroying America”.[1] 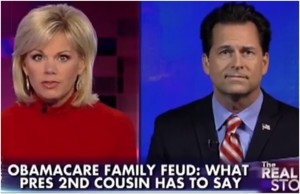 President Obama’s distant second cousin has taken family feuding to a new level in his bid for the Senate. Dr. Milton Wolf, the radiologist challenging Sen. Pat Roberts (R-Kan.), told The Hill on Monday that while Obama’s a “nice guy,” he believes he’s “the worst president in our time, if not our history.” Wolf says his mother realized after reading a newspaper article in 2008 about a great uncle who served in World War II, Charlie Payne, in which a “senator from Illinois” is mentioned, that Payne and Obama are related.

“Look, ObamaCare has been such a disaster, an utter and complete disaster, that I bet even Obama wishes Ted Cruz had been successful in his filibuster in stopping that thing,” he said.

“We had the bank bailout. We had the auto bailouts. And then these establishment Republicans opened up the doors of the White House and rolled out the red carpet and invited Barack Obama in because of their failures,” said Wolf.
Wolf suggested he’d further break with party establishment by refusing to back Sen. Mitch McConnell (R-Ky.) as the chamber’s majority leader, if Republicans take back the Senate this fall.

But Wolf faces a very steep hill to climb before he’s able to cast a Senate vote. Roberts’s campaign recently released an internal poll, conducted last week, that gave Roberts a 54-point lead over Wolf among GOP primary voters, with Wolf taking only 15 percent and another 16 percent undecided.

“I’ve been campaigning for three months and up till now I haven’t spent a dime on advertising. He’s been in Washington for 47 years, and I’m taking 15 percent support from him? I think that’s pretty darn good,” he said.

It shows a certain amount of moxy to come out and tell the truth about your famous cousin. Wrong is wrong and even if Obama were doing it unawares,: someone must stop him from: ruining every institution in America. Wolf’s “coming out” against Obama is more of self preservation since Dr. Wolf’s livelihood and industry are under direct attack from the Presidents progressive agenda. I hope that Wolf will be effective as he joins the forces against the ‘worst President in America’.

See also,
Dem Rep Admits Obamacare Is Unraveling & “We Don’t Have a Solution”[3]