What President Obama doesn’t realize is that HE’S LOST ALL CREDIBILTY with the American people.:  Oh, his low info base may continue to swallow his rhetoric, but even that segment of the population is bewildered he’s not the Messiah.:

Politico[1] reports President Barack Obama will launch a coordinated campaign Tuesday by the White House, congressional Democrats and their outside allies to return attention to why the Affordable Care Act passed in the first place. 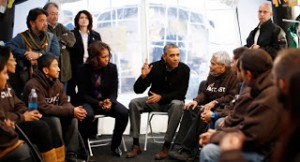 After two months of intense coverage of the botched HealthCare.gov rollout, the president will host a White House event kicking off a three-week drive to refocus the public on the law’s benefits, senior administration officials told POLITICO.

The White House will take the lead in emphasizing a different benefit each day until the Dec. 23 enrollment deadline for Jan. 1 coverage. The daily message will be amplified through press events and social media by Democratic members of Congress, the Democratic National Committee, congressional campaign committees and a