I hate these kind of stories. I want to believe that our Government officials are fair minded and really in their job to help Americans. The Transportation Secretary that Obama chose seems to be more interested in defending Kuwait’s anti-Jew policies than defending Americans rights to fair travel IN the United States.[1] 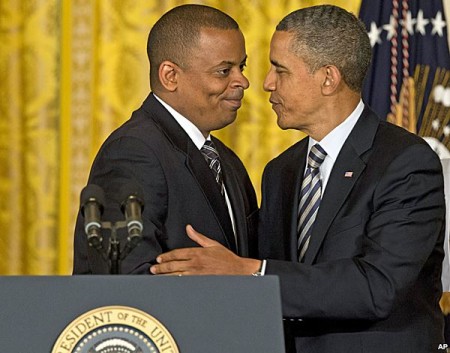 Excerpted from Front Page Mag:[3] : Anthony Foxx was the Democratic Mayor of Charlotte. Obama called him an “impressive leader” when he appointed him Secretary of Transportation and he certainly is leading when it comes to defending Muslim discrimination against Israeli Jews. [4]

In late 2013, a formal complaint was filed with the U.S. Secretary of Transportation (Secretary) alleging illegal discrimination by Kuwait Airways (KA) on the basis of national origin, in violation of federal law proscribing such discrimination by air carriers. The complaint concerned the airline’s refusal to transport Israeli nationals on nonstop flights from New York to London.

The Secretary denied the complaint earlier this year, asserting that KA had not violated any U.S. anti-discrimination law because the airline is required to comply with Kuwaiti law, which prohibits Israeli passport holders from entering Kuwait.

As the attorney now pursuing this matter correctly articulated, “In essence, the Secretary determined that Kuwait Airways did not violate U.S. law because that airline was required by Kuwaiti law to discriminate against Israeli nationals.” The Secretary’s rationale is particularly unfounded because the flight at issue goes from New York to London; the fact that Israeli passport holders cannot enter Kuwait is wholly irrelevant. Moreover, if any entity conducts business in the United States, it must comply with U.S. law.

This isn’t about Jews vs Muslims and who’s on whose side. This is about an American being hired to do a job to serve American interests not Kuwaits. The disturbing thing is that this kind of attitude of putting American allegiance last is becoming more prevalent.

Other Obama picks who are running defense for Muslims?,
COVERUP: Top US Intelligence Official Lied to Congress About His Involvement With the Muslim Brotherhood; Shielded From Public By the Top Inspector General[5]