The Ohio National Guard is preparing for a terror attack orchestrated by pro-gun “right-wing terrorists,” because that’s “the reality of the world we live in.” : No, really:[1] 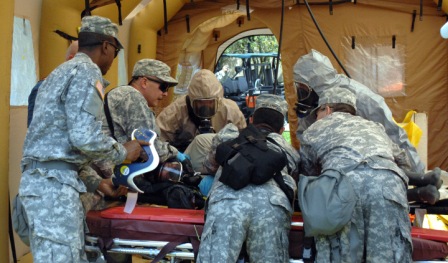 Portsmouth Chief of Police Bill Raisin told NBC 3: WSAZ-TV in Huntington, West Virginia: that the drill accurately represented “the reality of the world we live in,” adding that such training “helps us all be prepared.”

The ONG team discovered biological weapons being produced in the school, requiring activation of containment and decontamination procedures.

Participants in the disaster drill located documents expressing the school employees’ “anti-government” sentiments, as well as a note identifying Pierce as the fictional right-wing terrorists’ leader.

I’d like to say this is stunning, but it isn’t. : Who are they going to target? : Muslims? : They’d get labeled Islamophobes?

They target right wingers because it’s safer for them.

How’s that for irony?