That popping sound you hear? : That’s the sound of liberal head exploding across the country. : Why? : Bill O’Reilly told the truth[1], and you know how they feel about facts: 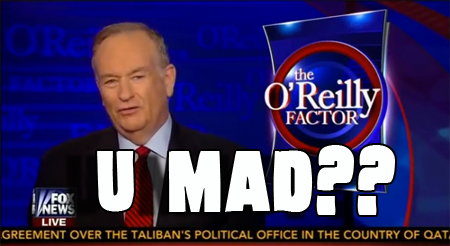 During his passionate monologue, he completely called out black community leaders who have failed their own people. O’Reilly argues that such leaders would rather belabor the Zimmerman verdicts instead of addressing the real issues facing the black American community.

The FOX host said, “You want a better situation for blacks? Give them a chance to revive their neighborhoods and culture.: Work with the good people to stop the bad people. You can’t legislate good parenting or responsible entertainment. But you can fight against the madness with discipline, a firm message and little tolerance for excuse making. It is now time for the African American leadership, including President Obama, to stop the nonsense. Walk away from the world of victimization and grievance and lead the way out of this mess.”

He continued, “The reason there is so much violence and chaos in the black precincts is the disintegration of the African American family… When was the last time you saw a public service ad telling young black girls to avoid becoming pregnant? White people don’t force black people to have babies out of wedlock.”

No, that’s truth. For all the talk of legislation, the problem is rooted in culture. It won’t be government that fixes this problem, unless it’s through complete control of the people.

And who wants that?