This is what’s wrong with military leadership today and it needs to be addressed right away! This is a real life example that equality is a “myth” in America when one group gets 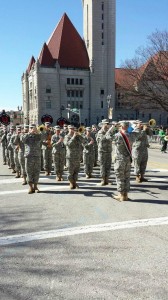 [1]preferential treatment over another.
Christian Post[2] reports despite the fact that military service members have recently been permitted to march in gay pride parades, the Department of Defense prohibited members of the Missouri National Guard from attending a one-hour meet-and-greet with children at a vacation Bible camp held a small Baptist church in the rural southwest corner of the state in late July.

According to a military bylaw, personnel are not allowed to participate in an official capacity in religious or ideological events. That regulation, however, appears to have been selectively applied.

Guardsmen were prevented from appearing at the Bible Baptist Church in Carthage to be honored and thanked by kids and their pastor. But the D.C. military color guard should was allowed to march in Washington D.C.’s gay pride parade in early June. There was also one military service member who marched in a gay pride parade in mid-July while holding the hand of his husband.

The regulation states: “Army participation must not selectively benefit (or appear to benefit) any person, group, or corporation (whether profit or non-profit); religion, sect, religious or sectarian group, or quasi-religious or ideological movement.”
“I will never understand why it’s OK for the military to march in a gay-pride parade but not be allowed to spend an hour talking to children who look up to them,” one Missouri guardsmen told Todd Starnes of Fox News[3].

In 2012, The Defense Department allowed service members to march in San Diego’s gay pride parade while in uniform.