Prior to last night’s game between the Philadelphia Eagles and the Chicago Bears, the Eagles honored one of their former cheerleaders. Rachel Washburn left the Eagles’s cheerleading squad for the Army[1] after a trip to Kuwait in 2008: 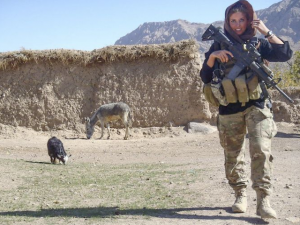 Washburn made a trip to Kuwait in 2008 as part of a military goodwill tour with the Eagles cheerleading squad and that’s when she decided that maybe she wanted to make the Army a bigger part of her life, “Getting to actually talk to people who are in the military and doing their jobs day in and day out… was very eye-opening,” Washburn said of being in Kuwait. “It was kind of what re-lit the fire and my passion for the military.”

After three seasons of cheerleading with the Eagles (2007-09), Washburn decided she wanted to serve her country. Joining the Army wasn’t Washburn’s first taste of military life though. Washburn’s father was a Army helicopter pilot and Air Force Fighter pilot.

The 25-year-old 1st lieutenant just finished her second tour in Afghanistan, where she once delivered a baby for a local woman who was caught in a snowstorm. “Everything was successful,” Washburn says.

With just over one year of service left in the Army, Washburn says she’s thinking about more, “There are some opportunities that are enticing me,” she said.

And she’s not manning a desk or bringing up the rear:

Lieutenant Washburn was an Eagles Cheerleader from 2007-2009 and recently returned from her 2nd tour in Afghanistan, where she was deployed to the dangerous Logar Provence. During her tour, she served as a Platoon Leader for a Multi-sensor Ground intelligence platoon with the 3rd Infantry Division, and earned numerous honors, including the Bronze Star Medal. She was also one of the first female soldiers in the Army’s competitive Cultural Support Team, attached to Special-operations combat forces such as the Army Green Berets, Rangers, and Navy SEALs.

Here’s a video on Washburn: