Liberals and femisogynists constantly like to preach to us about how unnatural monogamy and marriage is — all the easier to break down the nuclear family if they work on weakening marriage first. Thankfully, there are stories like this one to remind us of the lasting power and beauty of marriage and love. 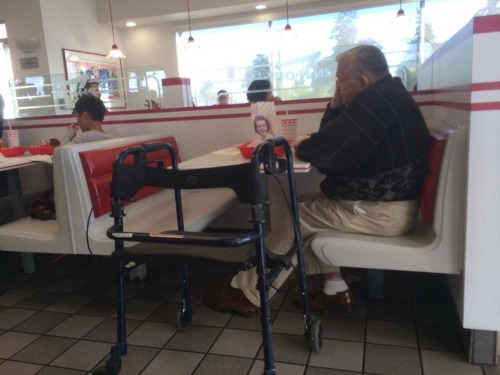 Seeing someone eating alone at a fast-food restaurant isn’t necessarily an unusual sight, but what one woman snapped a picture of at an In-and-Out Burger has been shared more than 7,000 times within the past week.

What got Madina Bashizadah’s attention was not the older man sitting alone or the walker beside the table, but the photograph propped up toward him as he ate his hamburger.

The photo featured his late wife.

“Oh my god I just died!!! He has a picture of his wife with him as he eats!” Bashizadah wrote on Twitter.

… Bashizadah told the Post that other people asked him about the photograph and he was “excited to talk about her.”

We found out that she was his sweetheart, his wife who passed away 5 years ago. They met at 17 but the war had kept them apart. He had searched for her for 10 years and one day as he was telling his barber the story, the barber calls his daughter in and it ends up being her. They were married instantly and it lasted for 55 years until she passed. He takes her photo everywhere. On one side of the laminated photo it’s him and her sitting on a couch together and on the back it has a photo of him and her side by side when they were young. Goes to show you true love does exist.

There’s a reason that this story went viral and touched so many people.
That kind of love is not just moving — it is a beacon of hope, hope that liberals and femisogynists are furiously trying to stamp out.