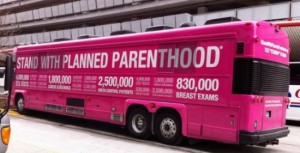 How does she know it’s a “total myth” that there’s a link between the two? She doesn’t cite any sources. It seems like Planned Parenthood isn’t interested in mere “sex education,” but in promoting certain sexual interests and fetishes as unquestionably fun and healthy, even for teens. That’s not “education.” And they’re using your tax dollars to do it.