Listening to Mark Levin today I found out that Obama nominated infamous lawyer of a cop killer, Debo P. Adegbile, to be head of the Department of Justice Civil Rights: Division. It appears that only gangsters and cop-killers are the ones with civil rights that need to be protected and if this is the case then President Obama picked the right man. The left is aghast that the widow of the cop murdered by Debo’s client wants to testify at confirmation hearing for controversial Obama nominee[1] 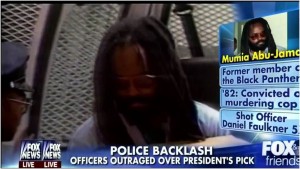 The widow of a Philadelphia police officer gunned down by a man whose lawyer has been picked by President Obama for a top civil rights post says she wants to testify at his confirmation hearing.

“She has requested that she be given the opportunity to be heard before the committee,” Grassley said. “I think it’s a reasonable request and I support it.”

Adegbile has been described by critics as “radical,” “dangerous” and “outside the mainstream.” Obama nominated Adegbile to head the Justice Department’s Civil Rights Division. However, he is now facing increased criticism for his role in getting convicted cop-killer Mumia Abu-Jamal’s death sentence overturned during his time as a practicing attorney with the NAACP Legal Defense and Educational Fund.

“Officers who knew Danny, and who like him put their lives on the line every day, must now witness Adgebile, a man proud to have chosen to aid the murderer of their friend, singled out for honors and high office by the government of the United States,” she wrote to Sen. Patrick Leahy, chairman of the Senate Judiciary Committee, in a Jan. 14 letter. “It is an abomination to now reward Mr. Adgebile as if he had done something wonderful.”

Asked about the case during a Senate Judiciary Committee hearing earlier this month, Adegbile said, “It’s important, I think, to understand that in no way does that legal representation, zealously as an advocate, cast any aspersion or look past the grievous loss of Sergeant Faullkner.”

Maureen Faulkner isn’t the only one casting doubt on the nomination. The Fraternal Order of Police recently sent a letter to Obama opposing Adgebile’s possible appointment.

“This nomination can be interpreted in only one way: it is a thumb in the eye of our nation’s law enforcement officers,” Chuck Canterbury, president of the police group, wrote in a letter addressed to Obama.
Calls to the Justice Department for comment were not immediately returned.

Obama is known for surrounding himself with the most extreme appointees in history so it comes as no surprise that his nomination to head the DOJ Civil Rights division has no regard for the civil right of Daniel Faulkner and family to have justice served for Officer Faulkner’s violent murder. Another jewel coming from the mighty pen of Barack Obama.

See Also,
5 People and Groups Abused By the Government For Opposing Obama[3]