Everything about this bogus report from the corrupt New York Times screams “political cover” for Hillary Clinton’s assumed presidential run in 2016.:  The NY Times is dutifully doing their part as damage control/public relations experts to try and remove the Benghazi milestone around her neck! 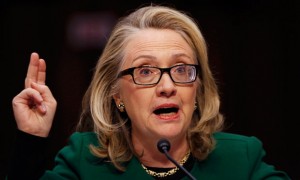 [1]Washington Examiner[2] reports a controversial article from David D. Kirkpatrick of the New York Times[3] published Saturday has received quite a bit of attention for claiming,
“extensive interviews with Libyans in Benghazi…turned up no evidence that Al Qaeda or other international terrorist groups had any role in the assault.”

New York Rep. Peter King said that Kirkpatrick’s assertion is “misleading,” as reported by Fox News[4], in that Ansar al-Sharia, an extremist Islamic group who are widely known to be behind the attack, is “believed to be an affiliate terror group of Al Qaeda.”
Ironically, the New York Times[5] reported in October, 2012,

“In the months leading up to the Sept. 11 attacks on the American diplomatic mission in Benghazi, the Obama administration received intelligence reports that Islamic extremist groups were operating training camps in the mountains near the Libyan city and that some of the fighters were ‘Al Qaeda-leaning,’ according to American and European officials.” [emphasis added]

Kirkpatrick does not mention this report, in which he was a contributor, in his article on Saturday.

He also does not mention the attack on the CIA outpost in Benghazi just three months before the Sept. 11 attack.