MONTGOMERY, Ala. — Bailey Barber greeted us at the front door of her family home Saturday morning with ecstatic news. “We’re going to a parade,” announced the 6-year-old daughter of Republican congressional candidate Rick Barber[1].

Retail politics requires a relentless press-the-flesh effort on the part of the candidate, and Barber hit the streets Saturday. After attending a morning conference of 2nd Congressional District officials at the annual state GOP meeting[2] at Montgomery’s Renaissance Hotel, Barber learned (via Facebook) that there would be a pre-Mardi Gras parade in the Elmore County town of Millbrook[3].

Despite cold, windy weather, hundreds turned out on Main Street in Millbrook for the parade, with children collecting the beads, trinkets and candy thrown by parade participants. Bringing along his daughter, Barber walked the route, handing out cards and shaking hands. 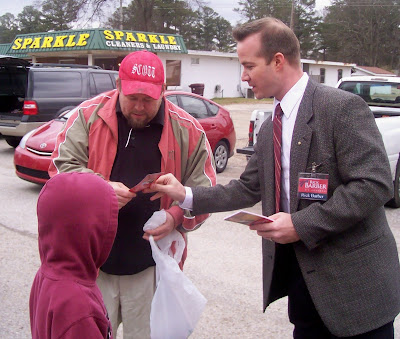 [4]
Barber talks to a Millbrook voter. “I’d love to have your vote June 1,” he told voters, referring to the date when he’ll be facing off against Montgomery City Councilwoman Martha Roby in the Republican primary. Here are three short videos, beginning with the fire trucks that led off the Millbrook parade, and Bailey scrambling to grab some Mardi Gras beads thrown by the firemen. 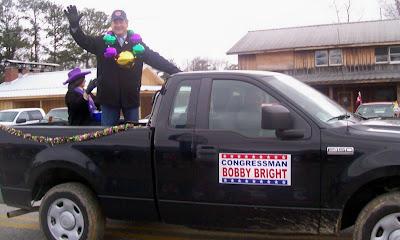 [5]
Democratic Rep. Bobby Bright — the “Blue Dog” congressman whom Barber hopes to defeat in November — rides in a truck in the Millbrook parade. Bright spotted Barber shaking hands in the crowd and was heard to say, “I see him over there.” 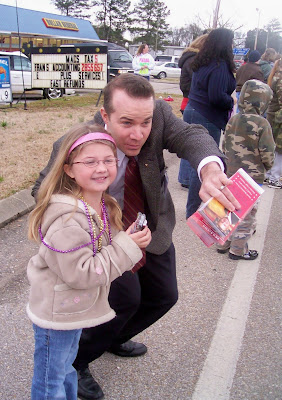 [6]
Barber points out a float in the parade to his daughter. 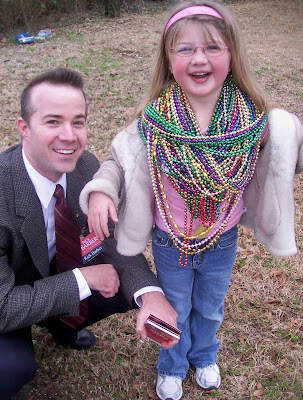 [7]
By the time the parade ended, Bailey sported an impressive collection of Mardi Gras beads.

How many votes did her dad collect? It’s hard to say, but there is ultimately no substitute for the old-fashioned politics of meeting voters one-on-one and asking for their votes. For all the advances in communications — TV ads, phone banks, e-mails, etc. — Americans still like to see candidates doing this kind of retail campaigning. Anyone who watched the Scott Brown campaign in Massachusetts[8] knows what a difference it made that Brown spent weeks driving his truck from town to town, shaking hands with voters, while his opponent . . . didn’t.