Poll Results: Just 11% of Black Youths Say Life Is Better For Them Under Obama…

These results from Rasmussen poll done March 2-3 have got to be disconcerting for Obama. Obama’s voter base is unhappy with their life under Obama.[1] 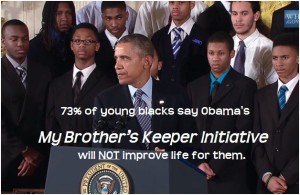 President Obama is going to have to do a whole lot more than promise to make things better for young blacks under his new “My Brother’s Keeper” initiative, because 71 percent of voters in a new poll say life for the group is the same or worse than before he came into office.

Rasmussen Reports[3] reveals that just 16 percent of likely voters believe life for young blacks has improved since Obama’s 2008 election, while 22 percent say it has gotten worse. Some 49 percent said nothing has changed. Among blacks, some of the results are worse, with just 11 percent believing life has gotten better for African American youths over the past five years. On the slightly positive side, only 8 percent believe it has gotten worse. The poll puts the spotlight on dissatisfaction among some in the African American community that the nation’s first black president hasn’t focused enough on issues important to them. It also raises the bar for Obama’s new initiative, which he plans to make a hallmark of his eventual retirement.

While both whites and blacks had hoped Obama’s election would improve race relations and the status of African Americans, the poll finds that didn’t happen. For example, just 10 percent of all voters felt race relations has improved since Obama’s election, said Rasmussen in a related poll. The new poll asked voters about Obama’s new program and 39 percent said it is at least somewhat likely that the new $200 million initiative would improve life for young blacks. A larger 49 percent “view it as unlikely that the My Brother’s Keeper initiative will improve life for young blacks, with 24 percent who say it’s ‘Not At All Likely’,” said Rasmussen.

The survey of 1,000 likely voters was conducted on March 2-3, 2014 by Rasmussen Reports. The margin of sampling error is +/- 3 percentage points with a 95 percent level of confidence.

The good news for Obama is the media will continue to run defense for him so that people don’t connect the dots back to Obama.