Priorities: De Blasio Brings Back the War on Big Gulps

Having solved all the problems in New York, communist Mayor Bill de Blasio moves his attention to how much people are drinking. : Not alcohol. : Soda:[1] 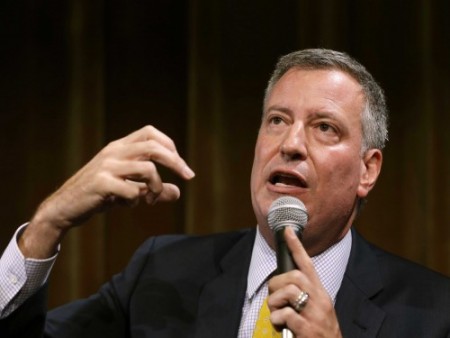 Mayor Bill de Blasio announced this week his administration will pick up where former mayor Michael Bloomberg left off and will continue the battle to ban sodas larger than 16 ounces. The city will appeal a state court ruling that axed the ban last year.

City lawyers will argue the case at the Court of Appeals on June 4, the New York Daily News reported this week.

Former Mayor Michael Bloomberg got lots of headlines in 2012 when he declared war on Big Gulps and other large sugary drinks.

The much-discussed ban on sodas over 16 ounces was an edict issued by the city’s Health Department and never got approval from city council.: A state judge in March 2013 blocked the ban and said Bloomberg overstepped his authority in issuing it without the city council’s consent.

De Blasio and Bloomberg have not seen eye-to-eye on everything, but the new boss is the same as the old boss when it comes to regulating away that special kind of joy that can only be found at the bottom of a half-gallon of Coca-Cola.

Let me ask you this: : is this more about the health of New Yorkers or is it about them getting comfortable with government telling them what they can eat and how much?

I’m curious what you think.

See also: : Dems Really Antsy Over Release Of CIA Torture Report, Which, Dude, Was Like Years Ago