Got White Privilege? Got Heterosexual Privilege? Yeah, then according to liberals you should be ashamed of yourselves and feel guilty. Do you know what intersectionalism even is? How dare you!!! It’s the study of intersections between different disenfranchised groups or groups of minorities; specifically, the study of the interactions of multiple systems of oppression or discrimination… in English (for you Language Privilege people): It’s a way to measure your level of excuses to your lack of success in life.

If you are only in one group deemed as typically “discriminatory” then you are not as bad off as someone in two or even three groups and you will have to work harder to achieve because you will not have as many “excuses”: for failure. Okay.. I know, I sound totally cold-hearted. I think I need some Intersectionalism and Privilege training because I just don’t feel the guilt I should for being alive, staff members at WWU get this sensitivity training regularly.[1] 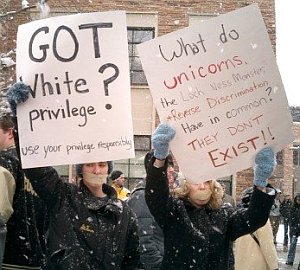 “I felt I would be discriminated against based on my political and religious beliefs, and because I don’t believe the content of the meetings will reduce racism or other ‘isms’,” the WWU staff member told Campus Reform anonymously for fear of retribution. “The primary theme of the meetings makes people considered privileged feel guilty and minorities feel self-pity.”

“At the beginning of the Cultural Competency Staff Meetings several employees felt uncomfortable talking about sensitive racial topics, so we were told not to share conversations from the meetings outside of [them],” the anonymous staff member wrote in an email. “Some people still didn’t feel comfortable so the Dean of Students said the meetings are optional if you don’t feel comfortable attending.”

Dean of Students Theodore Pratt said that while “there’s always going to be someone that may find some issue,” the overall feedback his office has gotten has been positive.

“What we do is if there are areas of people that are maybe marginalized or seems [sic] to fall between the cracks, or if you’re looking at veterans, people with disability, maybe it’s women, gender issues, religious issues, we want to make our staff sensitive,” Pratt told Campus Reform.

Pratt, who has overseen students at the university as dean for 15 years, said the meetings are visited by “experts” on gender issues and -isms from the community or broader organizations to help teach WWU employees. Reading materials are also a part of the staff meetings, including pieces such as Robert Jensen’s “White Privilege Shapes the U.S.[3]” and Alexander Stille’s “The Paradox of the New Elite.[4]”

Okay, 1..2..3… all together now *screeeeeaaaaaaaaaam*. Feel better? Nah, me either. Get your high boots on folks because this is the new reality… the new philosophy.

Also,
Drunk father rolled on top of his 2-month old baby boy and killed him after a night drinking to celebrate his anniversary[5]