I never seen a U.S. president humiliated in this way by a Russian leader.:  This never would have happened to Ronald Reagan or George W. Bush.: 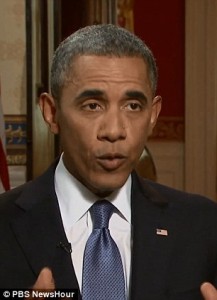 “The potential strike by the United States against Syria . . . will result in more innocent victims and escalation, potentially spreading the conflict far beyond Syria’s borders,” Putin wrote.

The Times piece, published online on the 9/11 anniversary, even raised the specter of terror[3].

“A strike would increase violence and unleash a new wave of terrorism,” he wrote. “There are few champions of democracy in Syria. But there are more than enough Qaeda fighters and extremists of all stripes battling the government.”

He also contradicted Obama’s insistence that Assad was behind a chemical attack on civilians that killed more than 1,400.

“There is every reason to believe [chemical weapons were] used not by the Syrian army, but by opposition forces,” he wrote.

Putin is the Marionette and Obama is the wooden puppet.:  It’s embarrassing to see a U.S. president played so badly.:  But, hey I didn’t vote for the guy.:  I had good reason.:  I knew Obama was a media created fraud.:  Putin is demonstrating that point quite effectively.: :

Originally published at The Last Tradition : [5]