A panel on Melissa Harris-Perry’s MSNBC show laughed and mocked the adopted black grandchild shown in a photo of Mitt Romney, going as far to sing the classic Seasame Street song, “One of these things is not like the other. : One of these things just doesn’t belong[1].”

After finishing the ditty, Glenn says, “And that little baby, front and center, would be the one.”

Dean Obeidallah then attacks the child as token, ““I think this picture is great. It really sums up the diversity of the Republican party, the RNC. At the convention, they find the one black person.”

Throughout, Harris-Perry chuckles along approvingly. 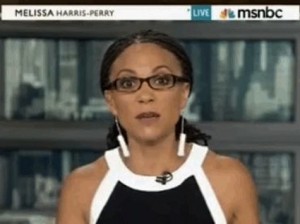 Nothing is lower than publicly humiliating a child, though.