A New Jersey man named Osvaldo Rivera cried as he was sentenced in the murder of 6-year-old[1] Dominick Andujar, who tried to fight Rivera off as he raped his sister. 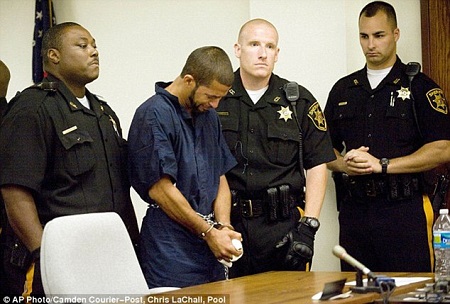 Rivera will spend life in prison for the murder.

About 12 a.m. on September 2, 2012, Rivera broke into Andujar’s family’s home and attacked his sister Amber as she slept on the couch. Amber, who was bleeding after being slashed in the throat by Rivera, ran to a neighbor’s home to call for help. She also says she was raped in the attack. Rivera, however, murdered the boy – Dominick’s throat was cut and he had injuries on his hands. He was found dead in the home by police.

‘He gave his life for his family,’ his mother, Debbie Burgos, told Philly.com.

Is he crying for the victims or himself? If it’s the latter, he doesn’t deserve an iota of sympathy.