Remember Matthew Shepard? The young gay kid who was murdered in Wyoming in 1998 because he was gay? Guess what — everything you think you know about him and the “hate crime” turns out is a lie. Hat tip to Breitbart: 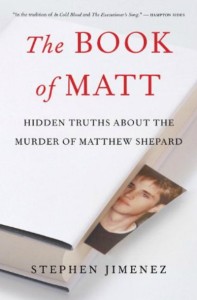 [1] Matthew Shepard was the winsome young homosexual in Laramie, Wyoming who in October 1998 was tortured, killed, and left hanging grotesquely from a fence. He was discovered almost a day later and later died in the hospital from his horrific wounds. On the night of October 6, Shepard met “two strangers” in the Fireside Lounge in Laramie. The two men offered Shepard a ride home but instead drove him to a remote area, robbed him, beat him with pistols, and left him splayed on a fence.

Cops found the bloody gun along with Shepard’s shoes and wallet in the truck of the two men – Aaron McKinney and Russell Henderson. McKinney and Henderson claimed the “gay panic” defense, that they freaked out when Shepard came onto them sexually and killed him in a rage. They made other claims, too, but were convicted and sentenced to life in prison.

Almost immediately Shepard became a secular saint, and his killing became a kind of gay Passion Play where he suffered and died for the cause of homosexuality against the growing homophobia and hatred of gay America. Indeed, a Mathew Shepard industry grew rapidly with plays and foundations along with state and even national hate crimes legislation named for him. Rock stars wrote songs about him, including Elton John and Melissa Etheridge. Lady Gaga performed John Lennon’s “Imagine” and changed the lyrics to include Shepard.

Thanks to a new book by an award winning gay journalist we now know that much of this narrative turns out to be false, little more than gay hagiography. As gay journalist Aaron Hicklin, writing in The Advocate asks, “How do people sold on one version of history react to being told that the facts are slippery – that thinking of Shepard’s murder as a hate crime does not mean it was a hate crime? And how does it color our understanding of such a crime if the perpetrator and victim not only knew each other but also had sex together, bought drugs from one another, and partied together?”

This startling revelation comes in The Book of Matt to be published next week by investigative journalist Stephen Jiminez, who over the course of years interviewed over 100 people including Shepard’s friends, friends of the killers, and the killers themselves. According to The Advocate, one of the premier gay publications in the country, Jiminez “amassed enough anecdotal evidence to build a persuasive case that Shepard’s sexuality was, if not incidental, certain less central than popular consensus had lead us to believe.” Even before Shepard died, two of his friends were peddling the narrative that he died at the hands of vicious homophobes. Within days the gay establishment latched onto what would drive the hate crimes story for years to come; even now, the Laramie Project, a stage play about the killing is performed all over the country. Indeed, it will be performed next week at Ford’s Theater in Washington DC.

But what really happened to Matthew Shepard?

He was beaten, tortured, and killed by one or both of the men now serving life sentences. But it turns out, according to Jiminez, that Shepard was a meth dealer himself and he was friends and sex partners with the man who led in his killing. Indeed, his killer may have killed him because Shepard allegedly came into possession of a large amount of methamphetamine and refused to give it up. The book also shows that Shepard’s killer was on a five-day meth binge at the time of the killing.

Hmm. These kind of stories always remind me that Margaret Sanger, founder of Planned Parenthood, wanted blacks to be wiped out by genocide, Woodrow Wilson was very fond of the Klan, Al Gore Sr. was a segregationist and FDR put Japanese-Americans in concentration camps. But you’ll never hear that in school…