Rep. Gowdy: I Have Proof There Was a “Systematic Intent to Hide” Benghazi Evidence 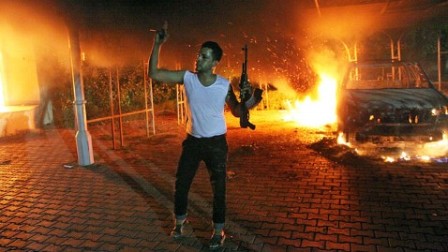 Gowdy says that John Kerry promised to assist in the investigation after taking over the State Department, but has been stalling ever since.

“I have evidence that, not only are they hiding it, there’s an intent to hide it,” the South Carolina Republican told “On the Record With Greta Van Susteren” on Fox News. “I can’t disclose that evidence yet, but I have evidence that there was a systematic, intentional decision to withhold certain documents from Congress – and we’re just sick of it.”

Shortly after Kerry took over the top State Department job last year, he pledged to cooperate with congressional investigations of the attacks, which also killed information management officer Sean Smith, and former SEALs Glen Doherty and Tyrone Woods…“He said a year ago, with respect to Benghazi, ‘If you have any trouble getting information, let me know,’” Gowdy told Van Susteren about Kerry. “Well, Mr. Secretary, we’re going to let you know that we’re not getting the information. We’re going to get him to come and explain why we’re getting documents 20 months late.”

You mean the guy who made “flip-flopper” a buzzword during his 2004 presidential run isn’t being straightforward? You don’t say! The only shocking part is that it’s been 20 months, and Congress hasn’t taken more aggressive action to get to the bottom of the Benghazi scandal.