If you have on the kid gloves, it’s time to take them off:[1] 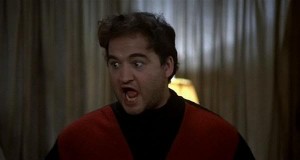 Rep. Louie Gohmert (R-TX) called on grassroots conservatives and Tea Partiers across the country to organize and fight back against the GOP establishment’s efforts to stamp out the movement during his speech to the South Carolina Tea Party Convention here on Sunday morning.

Gohmert argued that conservatives need a ground game and an organized strategy to stop House Speaker John Boehner, Karl Rove, and the Chamber of Commerce from destroying the Tea Party movement. He rendered a lengthy quote from the infamous scene in the classic movie: Animal House, where Bluto riles up the fraternity to fight back against the administration when things seemed darkest for them.

“So, a big national organization of corporations has declared war on us,” Gohmert said.:

So, some guy with a whiteboard has declared war on us. So, the Speaker may have declared war on us. Let me borrow from Animal House: “What’s all this laying around stuff? Why would anyone just lay around when our liberty, lives and loves are on the line? Did someone say let it go? The war’s over? What? Over? Did someone say over? No. It’s not over until we decide it’s over. Was it over when the Germans bombed Pearl Harbor? No! Well it ain’t over now! Because when the going gets tough, the tough get going!” What happened to the Tea Party I used to know? Where’s the spirit? Where’s the guts? This could be the greatest time of our lives but you’re going to let it be the worst because we’re afraid to go with Louie. We might get in trouble. Just kiss my aspen tree. From now on, not me, I’m not going to take it. We’re not going to take it anymore right? We’re going to stand up and take our country back!