He’s got a pen and a cell phone and he said he can do whatever he wants[1]. : After all, who’s going to stop him? : The Republicans? 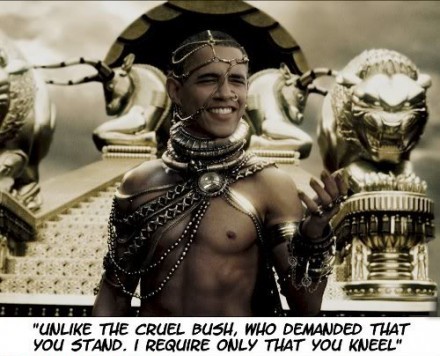 The Obama administration is: quietly forging ahead with plans to offer up an international commitment[3]: to reduce carbon dioxide emissions to fight global warming – without congressional approval.

Reuters: reports[4]: that the U.S. submitted its vision for a new international global warming agreement to the United Nations on Wednesday, suggesting a “bifurcated approach” of the 1997 Kyoto Protocol – placing different emissions targets for rich and poor countries.

“So this is just the latest example of President Obama’s contempt for obeying the Constitution and our laws,” Myron Ebell, director of the Center of Energy and Environment at the Competitive Enterprise Institute, told The Daily Caller News Foundation. “In the past, rulers who act as if the law does not apply to them were called tyrants.” […]

Annie Petsonk, international counsel to the Environmental Defense Fund, noted that the U.S. plan was legally different than the Kyoto Protocol – it doesn’t require congressional approval.

The: U.S. Constitution says[5]: that the president “shall have Power, by and with the Advice and Consent of the Senate” to make treaties with other countries. The 1997 Kyoto Protocol had to be ratified by Congress – and it never was, even though the Clinton administration signed onto it.

At what point does it become so outrageous that even Democrats start thinking something has to be done?

Do people have to be locked up for their political views? : What abuse of power is going to force action by Congress?

This is getting absurd.

See also: : Democrats Pull Out the Stops on Weaponized IRS