Report: So Many Jihadists Are Flocking To Obama-Liberated Libya Counter-Terrorism Experts Now Calling It “Scumbag Woodstock” 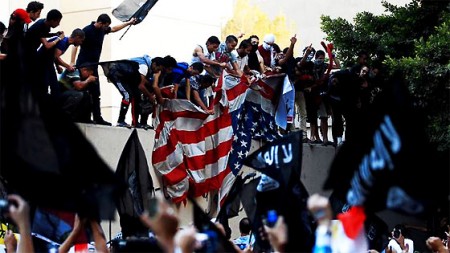 Leaders from at least three of al Qaeda’s most virulent affiliates are now in Libya. What are they planning there?

In the nearly 20 months since the September 11, 2012 Benghazi attacks, al Qaeda operatives and allied terrorists have flocked to Libya, making the fragile North African country a hub for those seeking to wage jihad from north Africa, current and former U.S. counterterrorism officials tell The Daily Beast.

Not only does al Qaeda host Ansar al-Sharia, one of the militias responsible for the Benghazi attacks that killed Ambassador Chris Stevens and three other Americans.: But U.S. intelligence now assesses that leaders from at least three regional al Qaeda affiliates–al Qaeda in the Islamic Maghreb, al Qaeda in the Arabian Peninsula and members of the organization of Al-Mulathameen Brigade loyal to Algerian terrorist, Mokhtar BelMokhtar–have all established havens in the lawless regions of Libya outside the control of the central government.

One U.S. military contractor working on counter-terrorism in Africa summed up the situation in Libya today as simply, “Scumbag Woodstock.”: The country has attracted that star-studded roster of notorious terrorists and fanatics seeking to wage war on the West.

I don’t know how this is possible, what with our people scouring the country looking for the people who killed our folks in Benghazi.

But, from another perspective, let’s get them all together and save money on bombs.

See also: : Parent arrested at school board for complaining about his child being assigned a book with graphic sexual content [VIDEO]: