Rioting And Looting In Ferguson, MO

An unarmed black teenager named Mike Brown was shot to death by a police officer. The circumstances admittedly seem a bit odd[1]. 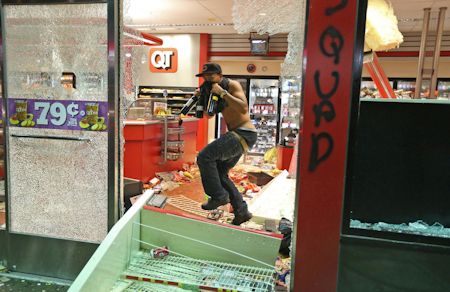 At a press conference on Sunday morning, St. Louis County Police Chief Jon Belmar gave the (very brief) official version of what occurred, accompanied by Ferguson Police Chief Thomas Jackson, who did not speak. St. Louis County is in charge of the investigation. Here’s what Belmar told reporters:

One of those individuals at the time came in as the officer was exiting his police car. Allegedly pushed the police officer back into the car where he physically assaulted the police officer. It is our understanding at this point in the investigation that within the police car there was a struggle over the officer’s weapon. There was at least one shot fired within the car after that. The officer came back out of the car, he exited his vehicle and there was a shooting that occurred where the officer in fact shot the subject and the subject – they were fatal injuries.

Belmar confirmed that all the shots fired came from the officer’s weapon and that though he does not have the final count, Brown was struck “more than a couple” times. He also confirmed that Brown did not have a weapon. A medical examiner will have a report in the coming weeks.

Any time an unarmed suspect is shot to death by a police officer, it should raise red flags and of course, this incident should be fully investigated to find out what happened. If the officer who shot Mike Brown shouldn’t have done so, then he should pay the full price for it. Since somebody’s dead, it’s highly likely that price should be prison time.

That being said, nothing that happened justifies rioting and looting[3].

Sunday’s peaceful protest over the shooting death of Michael Brown turned into looting by groups of people in Ferguson, MO. Around 8:30 p.m., just 30 minutes after the vigil for Mike Brown began, protesters in a different location became more aggressive.

By 10 p.m., St. Louis County Police had called for more assistance from all surrounding municipalities including St. Louis City and the Missouri Highway Patrol . Tactical units have been deployed across the area and the St. Louis County helicopter is in the air.

At this time, there are reports of several businesses burglarized or looted. A fire was set to the Quik Trip on West Florissant, looting at a tire store and a beauty supply shop as well as reports of damage to a Taco Bell.

If Mike Brown was wrongly killed by a police officer, we should have tremendous sympathy for him and his family. On the other hand, the first job of a government is to protect the public from roaming bands of violent looters and they should use as little force as is needed, but as much force as is necessary to do.
Endnotes: