This license gun owner has no business being arrested. New York City has one the most obtrusive gun laws in the country that makes it virtually impossible for ordinary law-abiding citizens to own guns. This puts NYC resident s at great risk and denies them their Constitutional rights!

Rochester Home Page[1] reports the New York City Police Department says on May 31, Diane Watkins went through the X-Ray machine to go to the Statue of 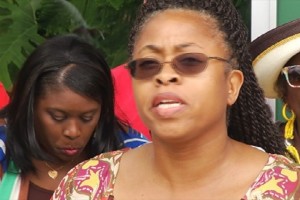 [2]Liberty and a loaded gun was found in her purse. Watkins was charged with criminal possession of a weapon, a felony punishable by 3 and 1/2 to 15 years in prison. Her bail was set at $2,500 cash and $7,500 bond. The New York City Department of Corrections has not responded to a request for information on how long she was jailed. The case is still pending.

Monroe County pistol permit records are no longer public. In New York City, gun owners have to get a permit to carry a weapon. Police said she did not have this New York City permit.

The Rochester STEM High School, where Watkins is a teacher, was on a class trip to New York City at the time. News 8 has been unable to speak to anyone on the trip.

Watkins has not responded to Facebook and email messages, as well as a message left on her cell phone.

The teachers union had no record of any disciplinary action on Thursday. But that could change, according to a statement sent by the district to News 8:

“The District was aware that Ms. Watkins was detained during the trip to New York City, but she would not say why and we could not legally compel her to explain. District and school officials learned of the charges against her in a communication from her attorney received the week of July 7th. The District is instructing Ms. Watkins not to contact students over the summer and will assign her to the Alternate Work Location when school resumes until this matter is resolved.”