Certainly Bill wants to repay Hill for those traumatic times when he had to hide behind her skirt. And certainly he feels that his legacy is tied to her. He suggests to Matt Bai in today’s Times Magazine that she can be F.D.R. to his Teddy Roosevelt, getting through the ideas that fell flat the first time.

“F.D.R. to his Teddy Roosevelt, getting through the ideas that fell flat the first time”?! 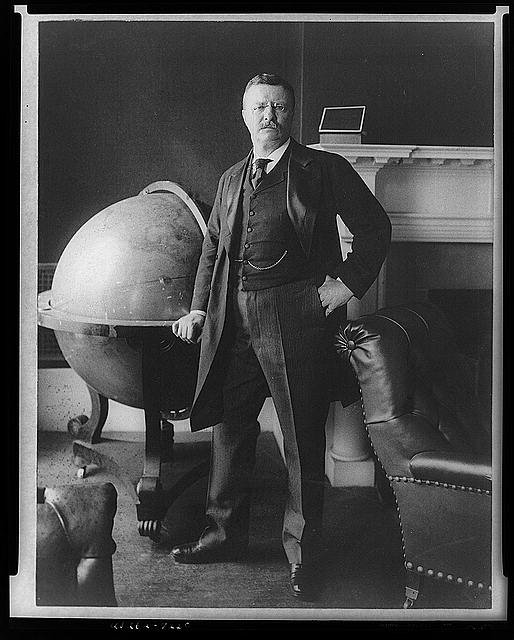 It’s true that the first Roosevelt was a “progressive” Republican who had no problem with big government[3], but he actually succeeded in getting most of his “ideas” enacted into law. Perhaps the “first time” Dowd means — the period when Teddy moved fairly far from his Republican mandate — was really the “non-time” of his failed campaign onthe Bull Moose ticket[4]:

Roosevelt campaigned on a platform of “New Nationalism,” which included such reforms as women’s suffrage, old-age pensions, and child labor laws. He called for the continuation of trusts but under government supervision, and advised their continued existence under government regulation.

Indeed there does seem to be a phenomenon of Presidents of all stripes falling more and more in love with executive power as time goes on. Scruples that candidates and first-term Presidents are able to keep in mind about the limits of their own reach become mere inconveniences of ideologues; now wise monarchs, they trust themselves as they once trusted no man to wield the greatest power benevolently, humanely, sagely. Teddy Roosevelt was no different.

But analogizing from the case of Teddy Roosevelt’s “first time” — his progressive Republican administration — to the time that never was — his abortive Bull Moose Administration — is the wrong analogy to the President Clinton who was and the President Clinton who would be. Yet it’s close: In both cases, we can learn from the example of a bored, relatively young ex-President willing to ride whatever will get him back in that ultimate driver’s seat.

Cross-posted at Likelihood of Success[5].