During the long primary season, Bill de Blasio emerged from the back of the pack thanks heavily to his promise to blacks and Latinos that he’ll illuminate Stop and Frisk.:

But last week a report emerged that de Blasio may be saying one thing to get elected, all the while knowing that he has no intention of doing away with the controversial 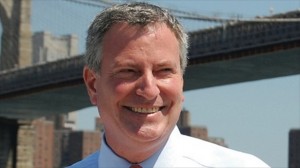 “In small groups and individual meetings, the candidate is said to be privately reassuring well-heeled New Yorkers that, despite the sweeping overhauls he talks about publicly, they can trust he will not get carried away and wreck the city.

In fact, some people came away with the impression that the Democrat was suggesting his campaign promises are just that – and will expire once he becomes mayor.”

When candidate Obama was running for the presidency he spent much of his time deriding George W. Bush’s use of predator drones.:  But, when Barack got to the White House he doubled down on them and many other Bush policies that have kept American safe.

New York hasn’t voted for a Democrat mayor in 20 years mostly on the legacy of out-of-control crime, dirty streets, 2,500 murders a year, and unbalanced budgets the last time a Democrat ran the city.:  Part of the reason why New York City enjoyed a renaissance was NYPD’s usage of Stop and Frisk that has helped make New York:  the safest big city in the country.:  Chicago, Philadelphia and Detroit don’t employ Stop and Frisk and the results are pretty evident to see with mass shootings on a weekly basis.:

: So is Bill de Blasio willing to risk crime going up and his watch?:  I don’t think so.:  I’m pretty confident that he’s is being as dishonest as Barack Obama was when he said people can keep the insurance they like to get re-elected.:

Oh he might declare Stop and Frisk is dead in his inauguration speech for the minority community to give a cheer.:  But, when he walks away from the podium don’t be surprised if he gives the police commissioner a wink signaling its business as usual.:  Or time to double down.: