Paul Ryan is dropping in likeability as he falls asleep at the wheel in Washington DC and proposes a crappy budget that increases spending yet again far from demonstrating any responsibility in governing. It’s so bad that Sarah Palin ranted about it on her Facebook page yesterday.[1] 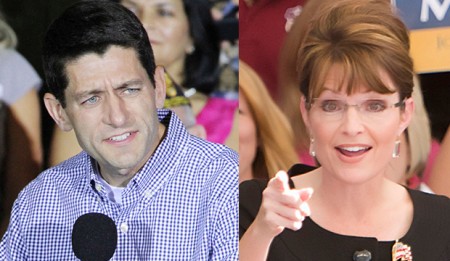 Holy Moly! Are you kidding? You’d think one who is representing the mighty Badgers, who made it to the Final Four based on sacrificial work ethic and discipline that obviously pays off in the end, he who represents the great state of Wisconsin that hosts this underdog celebrated college basketball team, would understand that future success depends on hard work and sacrifices. The latest Ryan (R, Wisconsin) Budget is not an April Fool’s joke. But it really IS a joke because it is STILL not seeing the problem; it STILL is not proposing reining in wasteful government overspending TODAY, instead of speculating years out that some future Congress and White House may possibly, hopefully, eh-who-knows, take responsibility for today’s budgetary selfishness and shortsightedness to do so. THIS is the definition of insanity. Do we still not understand how dangerous it is to allow government to grow unchecked as we shackle ourselves with massive debt — a good portion of which is held by foreign nations who don’t necessarily like us? If we can’t balance the budget today, what on earth makes us think it will happen at some future date? The solution is staring us in the face. We need to rein in spending today, and don’t tell me there is nothing to cut when we know every omnibus bill is loaded with pork and kickbacks.

Reading the article linked below gave me the same reaction that my daughter just caused when she punked me with a very unfunny April Fool’s Day announcement. As my Dad would say after these April Fool’s announcements, “This would kill a lesser man.” This out-of-control debt is killing our economic future.

Glad to see Sarah Palin is still in the game as an activist as she brings the news to her 4 million facebook followers.