Literally. In January, the Satanic Temple announced plans to build a statue on the lawn of the Oklahoma State House–and the finished product isn’t a pretty sight.[1] 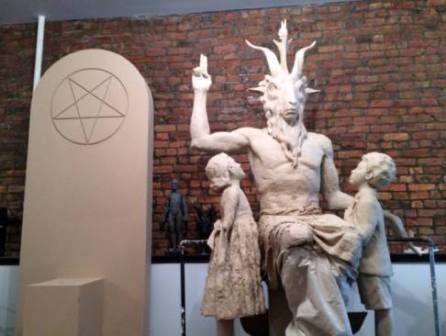 The Satanists say the statue is meant for “contemplation and inspiration,” but it’s hard to imagine feeling inspired by such ugliness. Unsurprisingly, the “Satanic Temple” sounds less like a temple than like a group of annoying, attention-hungry individuals who go around trying to piss off Christians.

The statue is a direct response to the state’s installation of a Ten Commandments monument outside the Capitol in 2012. State Representative Mike Ritze paid for the controversial statue with his own money, and therefore it was considered a donation and OK to place on government property. Following that line of reasoning, the Satanic Temple submitted a formal application for their monument.

As Trait Thompson of the Oklahoma Capitol Preservation Commission told CNN last December, “Individuals and groups are free to apply to place a monument or statue or artwork.” The applications are then approved or rejected by the Commission. Unfortunately, the state has placed a halt on issuing permits for any other monuments until a lawsuit filed by the ACLU against Ritze’s Commandments monument is settled.

I’m sure the Satanic Temple was just bluffing when they originally proposed the statue, and were dying for Oklahoma to fight them on it so they could run to the media and whine about “theocracy.” But no go. As is usually the case, Christians in Oklahoma are more tolerant than the people screaming about how Christians are oppressing them. They got their statue, practically side-by-side with the Ten Commandments. Now, who else wants to ship the members of the “Satanic Temple” off to a foreign country so they can learn a thing or two about real religious oppression? Let’s see how well-tolerated Satanists are in the Islamic Republic of Iran or rural Pakistan.