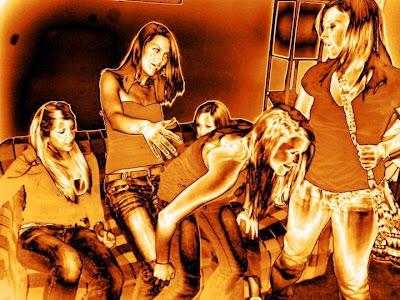 “All warfare is based upon deception” as China’s ancient Warcraft master taught[2], and like vClausewitz[3]
(or maybe it was Batman[4]) once sagely saged – self deception is the worst deception of all.

Daemoneoconically delish[5] Foundation For Defense of Democrazies President Clifford May (Oh! He got game bay bee![6]) points out 5 deceits[7] – self imposed no less – that not only totally queer the mix on Great Satan’s righteous wrath being delivered on the heads of creepy, murderous intolerant terrorists and proponents of Global J!had ala Imperial m”Hammedism[8] – it can get a lot of ppl killed in the process:

“…1: Yonathan Melaku was charged in federal court with shooting at the National Museum of the Marine Corps. The officials who arrested him later searched his home and found a videotape in which he is shouting “Allahu Akbar!” They also found a notebook in which he’d written about Osama bin Laden, al Qaeda, the Taliban and “The Path to Jihad,” a book of lectures by Anwar al-Awlaki, the American-born Islamic cleric who was widely considered a moderate before he fled to Yemen where he is now a top al-Qaeda commander.

“…So it’s pretty obvious what Melaku was up, right? Not if you’re a federal employee, it’s not. “I can’t suggest to you his motivations or intent,” James W. McJunkin, assistant director in charge of the FBI’s Washington field office told reporters at a news conference. “It’s not readily apparent yet.”

“…Many in the mainstream media also expressed befuddlement. A Washington Post story[9] carried the headline: “Pentagon Shooting Subject Not Known to Law Enforcement.” (Really? That’s the news here?) The article told readers that “a motive for the shootings – and why Melaku had possible bombmaking materials – remains elusive.” So does that mean we can’t rule out a crime of passion — or a paint ball competition that got out of hand?

“…To be fair, if you read to the very end of the story you will learn that it has occurred to some law enforcement officials that Melaku’s “writings and the contents of his laptop” might “indicate a desire to be involved in jihad.” Ya think? And not jihad in the sense of a struggle for individual self-fulfillment?

“…2: A couple of weeks ago, I wrote a column[10] arguing that there was no evidence to support the mainstream media narrative that Muslims in America face increasing discrimination and persecution — as do, for example, religious and ethnic minorities in most Muslim-majority countries, a situation the mainstream media assiduously avoid. I received many angry letters in response. My favorite included three newspaper stories meant to prove I was wrong.

“…The first cited a poll[11] showing that a majority of Americans “believe that Muslims face more discrimination than any other religious group in the U.S.” Well, yes, that has to be expected given the decade-long media campaign to establish this meme. The next was a piece by liberal commentator Alan Colmes headlined[12], “Growing Bias Against Muslims in America” and citing rising “claims of bias against Muslims in the workplace.” It, too, offered no proof — or even evidence — that such claims are justified by facts.

“…Finally, there was a story[13] about Muslims in North Carolina who, following the terrorist attacks carried out by Lashkar-e-Taiba in Mumbai, India, received an email saying that “such violent acts wouldn’t intimidate people, but only make them stronger.”

“…”I was furious,” Motaz Elshafi, an American-born Muslim who received such a note told USA Today. He had a right to be. The email he received — though by no means threatening — was misdirected. Nevertheless, one might have hoped Elshafi would mention that he was at least equally furious with those who slaughter innocent men, women and children based on their reading of his religion.

“…3:  The term “conscientious objector” used to refer to those who sought exemption from military duty because their religious beliefs prohibited their use of violence. But, as Patrick Poole has reported[14], in May the Secretary of the Army granted conscientious objector status to a soldier — a volunteer — who refused to deploy to Afghanistan. PFC Nasser Abdo claimed that sharia, Islamic law, prohibits him not from killing anyone, but only from killing fellow Muslims — including, apparently, “violent extremists” who join the Taliban and al-Qaeda.

“…Imagine if, in 1942, a PFC Helmut Shultz had said: “I don’t believe I could sleep at night if I take part, in any way, in the killing of Germans.” You think he would have been called a conscientious objector and sent merrily on his way?

“…4: A few days ago, the regime that rules Iran, designated by the U.S. State Department as the world’s most active state sponsor of terrorism, held what it called the First International Conference[15] on the Global Fight against Terrorism. The U.S. and Israel were singled out as “satanic world powers” with a “black record of terrorist behaviors.”  This should have been the subject of scorn and ridicule from the “international community.” But senior officials from at least 60 countries attended and UN Secretary-General Ban Ki-moon delivered a message via special envoy expressing his appreciation to Tehran. Apparently he was not bothered by the fact that Sudanese President Omar al-Bashir, indicted for genocide by the International Criminal Court, was among those attending. Don’t worry: American taxpayer support for the UN is not in jeopardy.

“…5: Yale University has decided to shut down the Yale Initiative for the Interdisciplinary Study of Antisemitism (YIISA[16]) following protests — for example from the Palestine Liberation Organization’s representative to the United States — that studying the rise of Jew-hatred in the Muslim world is by definition “racist” and “right-wing.” Meanwhile, the Islamophobia Research and Documentation Project (IRDP) at the University of California at Berkeley continues to receive funding and support.

“…A few years ago, Andy McCarthy wrote “Willful Blindness[17],” a book about political leaders, academics, journalists and others refusing to see the jihadi threat staring America in the face. But we’ve now gone well beyond that. The examples above — and I could cite many more — have to be seen as determined self-deception, if not symptoms of madness. I’m pretty sure Sun Tzu would agree.