Update to: previous story[1]– After the heartbreaking: news yesterday that a: family seeking religious freedom: was denied, I was so glad to hear that the force of the ‘voice of the people’ was able to create an unprecedented turn around with the federal government.[2] 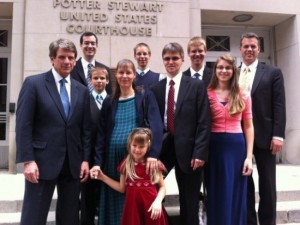 On Tuesday, the Home School Legal Defense Association (HSLDA) announced a drastic turnaround on the part of the federal government: The German Romeike family, which sought asylum in the United States to home-school their children, will now be allowed to stay in America.

“The Romeikes can stay!!!” the HSLDA announced on its Facebook page[4].

Just one day ago, the Romeikes thought they would be forced to return to Germany, where the state could take custody of their children because of their decision to home-school. Uwe and Hannelore Romeike have been fighting to remain in the United States since 2008, when they fled to Tennessee. A post on the HSLDA’s Facebook wall[5] signed by the organization’s chairman, Michael Farris, explains the change:

Today, a Supervisor with the Department of Homeland Security called a member of our legal team to inform us that the Romeike family has been granted “indefinite deferred status”. This means that the Romeikes can stay in the United States permanently (unless they are convicted of a crime, etc.)

This is an incredible victory that can only be credited to our Almighty God.We also want to thank those of who spoke up on this issue—including that long ago White House petition. We believe that the public outcry made this possible while God delivered the victory.This is an amazing turnaround in 24 hours. Praise the Lord.

The family has claimed Germany’s laws violate international human rights standards, but the U.S. Sixth Circuit Court of Appeals concluded last year that U.S. law does not grant asylum to “every victim of unfair treatment.”

Uwe Romeike commented in a statement on the HSLDA website[6]: “We are happy to have indefinite status even though we won’t be able to get American citizenship any time soon. As long as we can live at peace here, we are happy. We have always been ready to go wherever the Lord would lead us–and I know my citizenship isn’t really on earth.”

German Monk and: reformer for religious independence, Martin Luther, once said,”I have held many things in my hands, and I have lost them all; but whatever I have placed in God’s hands, that I still possess.” The Romeike family is a good example of doing all that you can do and then turning: the rest: over to God. Their faith has saved their family from being broken up by the German authorities and have created a strength that will carry those kids through peer pressure and many trials to come. I am proud that this family has chosen the United States as their refuge. I hope Americans will in turn have courage to stand up to protect that religious freedom that: people all over the world are seeking.