A Tennessee shop owner was taken into custody when his story about being attacked because he was gay fell apart[1]: 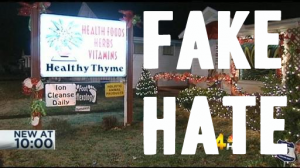 A man who told police he had been robbed and beaten at a Paris health food store a few days before Thanksgiving was arrested after he allegedly withheld information about the incident and has now been charged with filing a false report.

Joe Williams, 32, of 803 E. Wood St. was arrested Friday afternoon after turning himself in at the Henry County jail.

Williams originally told officers he had been beaten and robbed Nov. 20 at Healthy Thyme, which is at the same address as Williams’ home. There was also a fire, and Williams had a homosexual slur written on his forehead.

“He was given three opportunities to disclose that information, and he chose not to,” Watson said.

That leaves investigators trying to determine how much of Williams’ story might have been true.

“We’ve not been able to verify or dispel any of the statements made about the actual robbery or fire,” Watson said. “We’re looking into Mister Williams, and we’re looking into whether it did or did not happen.”

There’s some psychological problems with people who fake this kind of thing. I’m not going to say these attacks never happen, because they do. I just don’t understand the motivation to fake something like this. Is it a need for attention, or do they think they are helping a cause? What is it?