Single Mom Spends Night in Jail, Falsely Accused Of Committing a Felony for Recording a Cop

Brandy Burning knew her rights the day she was pulled over by officer O’Brien. The trouble was: the officer: didn’t know her rights and instead felt powerful over this single mom.[1] 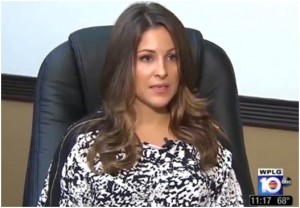 A Florida woman spent the night in jail[3] after a Broward County sheriff’s deputy accused her of committing a “felony” by audio recording their conversation during a simple traffic stop. Upon review, all charges against her were dropped – but now the Broward Sheriff’s Office (BSO) is facing a lawsuit.

Brandy Burning, a single mom, was pulled over by BSO Lt. William O’Brien for driving in an HOV lane. After some back-and-forth about her traffic violation, Burning informed the officer that she was recording their conversation.

“Oh, I forgot to tell you I was recording our conversation,” Burning is heard saying in the audio.

“I have to tell you, I forgot to tell you I was recording,” she repeats.

It was at this point that O’Brien accused her of committing a “felony” and demanded the cellphone. He also told her he knows the law better than she does.

“You are committing a felony. Hand me the phone,” O’Brien orders.

As Washington Post opinion blogger Radley Balko correctly notes[4], “[In] every state in America, you are well within your rights to record an on-duty police officer.”

After allegedly climbing into the car and attempting to take the phone forcefully, O’Brien removed Burning and arrested her. The mom can be heard screaming on the tape, demanding the officer take his hands off of her.

Burning was eventually charged with traffic violations and resisting arrest – but no crimes related to the recording. All charges were eventually dropped. The single mom still spent a night in jail and claims she suffered several bruises and scrapes during the traumatic experience.

“Touching me, trying to take my personal belongings from me, trying to put me in jail for something so small,” she recalled in an interview with WPLG-TV[5].

Burning’s attorneys have already notified the Broward Sheriff’s Office that they are planning to file a lawsuit on grounds of battery, false arrest and false imprisonment.

The more citizens who know our Bill of Rights, the safer we will be as individuals. Thomas Jefferson once said to ‘Educate and inform the whole mass of the people… they are the only sure reliance for the preservation of our liberty’.