Surprisingly the president of the Military Religious Freedom Foundation, Mikey Weinstein, is more concerned with people being free OF religion than for cadets to have the freedom to be religious. He’s currently fighting the U.S. Air Force Academy to restrict the cadets freedom of religion.[1] 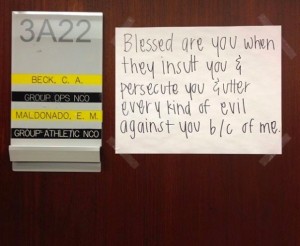 The leader of a church-state separatist group says that there’s a “revolt” underway at the U.S. Air Force Academy in Colorado Springs, Colo., after officials there removed a Bible verse from a white board outside a cadet’s bedroom door following complaints that its presence was offensive.

Cadets angry over the Air Force Academy’s removal of the verse have since begun posting scripture from the Bible and the Koran on their whiteboards in solidarity, said Mikey Weinstein, president of the Military Religious Freedom Foundation.

Weinstein said 29 cadets and four faculty and staff members – 26 of whom he described as Catholic or Protestant – disagreed with the verse’s presence and reached out to the Military Religious Freedom Foundation to complain. Weinstein then contacted the Air Force Academy with concerns and the verse was subsequently removed.

Weinstein said posting verses outside a bedroom door is unacceptable and illegal because that’s part of the “working squadron area” – a central and public location where cadets assemble.

Weinstein is now calling on the Air Force Academy to take action against those individuals who are posting scripture messages outside their doors, though he indicated that he isn’t sure how widespread the problem is.
“It’s a toxic environment there,” Weinstein said of the academy. “When you have a law that is followed more in its breach than in its compliance … it’s worse than if you didn’t have the law at all.”

Weinstein is willing to take the Air Force Academy to court if the issue isn’t resolved. Other legal analysts take a different stance on the matter.
“If the cadet didn’t violate any rules, then why was the quote removed?” Michael Berry, senior counsel for the conservative legal firm the Liberty Institute’s said in a statement. “It appears that the Air Force now believes Bible verses are a violation of AFI 1-1.”

In fact, Berry said the removal of the Bible verse and any punishment is actually a violation of the Department of Defense Instruction 1300.17, a provision that protects soldiers’ religious liberty.
“Unless it could have an adverse impact on military readiness, unit cohesion, and good order and discipline, the Military Departments will accommodate individual expressions of sincerely held beliefs (conscience, moral principles, or religious beliefs) of Service members in accordance with the policies and procedures in this instruction…,” the provision states in part. Air Force Academy officials did not respond to a request for comment from TheBlaze.

The irony about anti-religion people is that they are always crying out “hypocrites” and yet their entire platform is based upon hypocrisy. Their argument is that you should not be allowed to let others know of your belief and yet unbelievers should be allowed to force their unbelief on everyone through government mandate with laws created in backroom atheist humanist club meetings. As a devout believer in Jesus Christ as my Lord, Savior and Redeemer I have never shamed an atheist or tried to force my belief on them. Through my conversations with unbelievers in a Divine Creator I have always walked away amiably with this thought; Their unbelief makes them miserable and afraid to the point of fearing death and my belief whether misguided or guided allows me peace and freedom. It is the unbeliever who wants to shackle up the believer out of pure envy of the believers inner peace. Who is stealing freedom from whom?