Sudan: Teenager Faces Being Stoned To Death By Sharia Court For “Adultery” After Being Gang Raped… Update

Women in the U.S. complain about some invisible inequality against them. The story of the woman almost stoned to death for adultery after being raped is true inequality and oppression. [1] 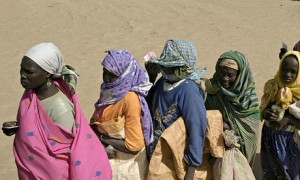 More from the real war on women.

A pregnant teenager who says she was gang-raped has been charged with adultery in: Sudan, and faces a possible sentence of death by stoning. The country’s judiciary has received millions of pounds in aid from the UK.

The 18-year-old Ethiopian, who is nine months pregnant, is being held in a police cell and until recently was sleeping on a bare concrete floor without a mattress or suitable food or clothing, according to the: Strategic Initiative for Women in the Horn of Africa (SIHA) network.

SIHA accused Sudan of discriminating against the alleged victim because she is both a woman and a migrant, and demanded her immediate release or transfer to hospital.

The young divorcee claims that last August, when she was about three months pregnant, she was lured to an empty property in the capital, Khartoum, and violently gang-raped by seven men. She reported the incident to a police officer at the time, but he decided against pursuing an investigation because of the Eid holiday. He was initially charged with negligence, but this was dropped on Tuesday.

According to SIHA, the attack was filmed by one of the men on his phone and circulated on social media six months later, leading to the arrest of both the alleged perpetrators and victim. The case came to court earlier this month. Five men, understood to be between 18 to 22, are accused of adultery; a sixth, who says he did not have sex with the woman, is accused of gross indecency.

The woman is charged with adultery, although she denied the charges and is pleading not guilty on the basis that the sexual act was against her will. Her attempt to make a complaint of rape has been denied on the technicality that she is under investigation on other charges and she should have complained at the time of the incident. Her request for bail has been denied by the attorney general.

Update: Thankfully she won’t be stoned to death.
(Guardian)[4] — A pregnant teenager who was gang-raped and ignored when she tried to report the crime has been convicted of “indecent acts” by a court in Sudan.

The victim, an Ethiopian migrant, was sentenced to one month in prison, which has been suspended, and fined 5,000 Sudanese pounds (:£528). The verdict was condemned by activists who said it would discourage rape victims from speaking out and entrench “a culture of impunity” for perpetrators.

The 18-year-old victim was searching for a new home when she was lured to an empty property in the capital, Khartoum, attacked by seven men and gang-raped. The incident was filmed by the perpetrators and distributed through social media six months later, triggering the arrests of everyone involved.

The woman, who is nine months pregnant, was initially charged with adultery and faced a possible sentence of death by stoning. This was dropped when the court accepted she is divorced. Since her arrest she has been detained in police cells and her requests for a transfer to medical facilities have been refused, the Strategic Initiative for Women in the Horn of Africa (SIHA) network said.

The story kinda has a happy ending but it brings up more questions. She was released from the accusations because she proved herself to be divorced. What would have happened to her if she had still been married and raped?