Remember, the knock out game is a hoax, except when it isn’t[1]:

A well-known New Orleans musician is hospitalized and unconscious after being jumped in the French Quarter.

Doug Potter’s family and friends believe he may have been a target of the “knockout” game.

On Monday night it was suppose to be business as usual.

“It’s a terrible tragedy. I was the one that let him out the gate last night. I left 10 minutes after he did, so it could have been any of us,” Tyler said.

“According to witnesses as well as video tape, two individuals just took it upon themselves to assault, and badly hurt him. He fell into the street,” said David Potter, the victim’s brother.

Since the brutal attack the 54-year-old bass player has undergone intensive brain surgery at University Hospital, where family and friends continue to pray for his recovery.

“Get these people off the street. I’ve had it. You live here all your life and you have to deal with something like that,” said David Potter.

As Potter remains in intensive care, loved ones are grappling to understand why the musician with such a “big heart” was the target of such a violent and senseless attack.

“In 2004, we started playing here. All this time we’ve had nothing bad happen. This is the first time something bad has happened,” said Steamboat Willie. 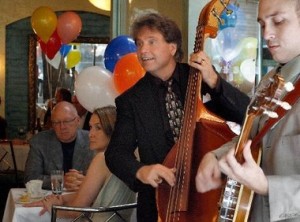 Prayers for him, and for the local law enforcement. : Here’s to them finding those responsible for this.