Syrian rebels gave them a choice. : Submit, or die. : Some didn’t even get a choice. : They were just beheaded. [1]: These are the same radicals[2] Obama and Sen. John McCain want to give American guns to: 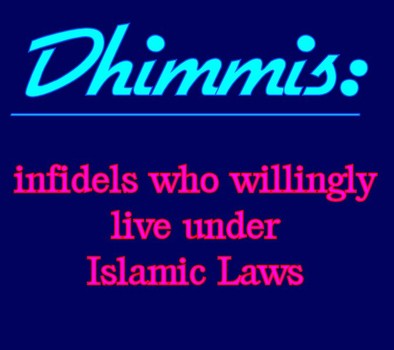 The city of Raqqa in northern Syria was once the residence of Harun al-Rashid, the famed fifth caliph of the Abbasid empire. That was the golden age of Islam, which produced the poetry, scientific thought and philosophy in which the moderate Hanafi stream flourished. The city subsequently went through centuries of ups and downs, through times of ruin and of prosperity, until last week it seemed to return to days of old, to the era of the great Islamic conquests, when a radical Islamist organization seized control of it.

For the first time in many generations, a dhimma (protection agreement) was signed between the Islamic State in Iraq and the Levant (ISIS) — an Islamist branch of Al-Qaida — and leaders of Raqqa’s several thousand Christians.: Members of ISIS gave the latter three options: accepting the agreement, converting to Islam, or risking death.

According to the 12 clauses in the accord, the Christians will commit to pay a twice-yearly poll tax of “four gold dinars” — which at today’s rate, comes to about $500 per person — with the exception that members of the middle class will pay half this amount, and the poor will pay a quarter of it, on condition they do not conceal their true financial situation.

The agreement permits the Christians to follow their religious practices, but they are prohibited from building new churches or rebuilding destroyed ones.

Furthermore, the accord states that Christians may not prevent members of their community from embracing Islam if they so desire. They are forbidden from bearing arms, from engaging in commerce involving pork with Muslims, and from acting against Muslim interests — for example, by giving shelter to spies or persons wanted by ISIS. Moreover, if Christians learn of a plot against the Islamic State, they must report it.

In return, the Christians are to be granted protection of life and property, but should they violate the terms presented, this protection is revoked.

The agreement is based on and accompanied by citations from Koranic texts and Islamic religious rulings, and includes threats and warnings which make it abundantly clear that ISIS is the dominant force to reckon with.

This is a model that the radical organizations seek to impose on all of Syria — a concept that strikes fear not just among Syrian Christians, but even among Sunni Muslim organizations not known for their ideological moderation.

There’s not much else I can say. : Just pray for them.