As a Latino myself, I totally agree with Cruz and Rubio.:  The GOP establishment is making too much over a “non-race” in New Jersey.:  The Democrat Party didn’t compete for the New Jersey governorship because they want Christie as the GOP nominee in 2016, so that the media can turn around and destroy him.:  It’s all a set up! 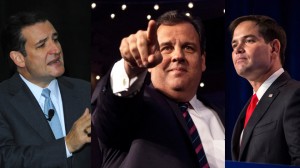 Fox News[2] reports while the spotlight shines brightly on Gov. Chris Christie, and more moderate Republicans see a glimmer of hope to winning back the White House, two prominent Tea Party stars are very publicly rolling their eyes — senators Ted Cruz and Marco Rubio.
Both senators on Wednesday downplayed the view that Christie’s victory in Democrat-leaning New Jersey, and his strong showing among Latinos — he got 51 percent of this crucial electorate’s vote — was a model for the GOP to follow on a national level.
Cruz gave what, at best, could be considered a backhanded compliment.
“I think it is terrific that he is brash, that he is outspoken, and that he won his race,” Cruz, who is from Texas, told ABC News. “But I think we need more leaders in Washington with the courage to stand for principle. And in particular, Obamacare is not working.”
The ABC report then added: “Asked whether Christie is a true conservative, Cruz walked away. Aides said he didn’t have time for more questions.”
Cruz, Rubio and Christie are all considered potential presidential candidates in 2016. But given the dismal performance of the GOP presidential candidate Mitt Romney in 2012 among Latino voters — he got only 27 percent of their support, while President Obama’s was 71 percent — political experts say Christie’s more moderate image and his broad appeal now put him in a stronger position to be the GOP nominee in 2016.
Rubio, Cruz’s fellow senator and fellow Cuban-American, expressed similar tepid feelings in an interview with CNN.
He said, essentially, that Christie’s style may be just fine for New Jersey, but that people should not be so quick to think it’s the magic GOP wand for the nation.
“I think we need to understand that some of these races don’t apply to future races. Every race is different—it has a different set of factors — but I congratulate (Christie) on his win,” he told CNN. :
On the night of his victory, and the next day, Christie did not hesitate to gloat about achieving the kind of broad support that has eluded his party.
“We won the Latino vote last night,” Christie said on Wednesday at a speech in Union City, traditionally an immigrant gateway, just a few miles from Manhattan, where 85 percent of the population is Latino. “Now find another Republican in America who’s won the Latino vote recently. Why? It’s because of the relationships. You get in, you build relationships, you build trust, and then people are willing to give you a chance. And of all the things that happened last night, that’s the thing that I am most gratified about.”
More here[3]

I haven’t heard Chris Christie call Obama a liar yet.:  You know why?:  He’s already the tool of the GOP consultant class that believes in not criticizing Obama personally.:  What did that get us in 2008 and 2012?:  Two losers named McCain and Romney.: