Ted Cruz warns about Obama’s lawlessness after recent Obama statement “We’re not going to wait for Congress, I’ve got a pen and I’ve got a phone”

In: an interview between: Mark Levin and Ted Cruz the audio of Obama is the most disturbing thing I’ve ever heard a President of the United States say, “We’re not going to wait where Congress is debating. My administration is going to move forward on things, I’ve got a pen and I’ve got a phone and that’s all I need”. Wait, what? Are you worried? Mark Levin and Ted Cruz say you should be:[1] 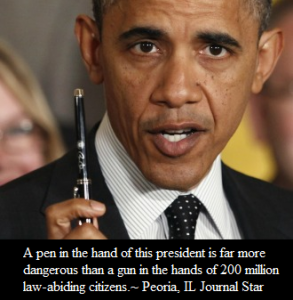 On the Mark Levin Show tonight, Ted Cruz hammered Obama tonight for his lawlessness, for continuing to subvert Congress and the law over and over again as it pleases him:

Out of all of the dismaying acts of the Obama presidency, perhaps the most dangerous is this consistent pattern of lawlessness. We have never had a president who over and over again, openly, aggressively defies the law. If he doesn’t like the law he refuses to enforce it. Or he simply proclaims it changed. And this is something that aught to bother everyone. This is something that shouldn’t be a partisan issue. On area after area, from immigration law onto drug law to welfare law, he decided he didn’t like the law so he proclaimed it changed. That’s not the way our legal system works.

If you weren’t sure of Obama’s intentions before and if you thought he was a stupid man being led… I hope this changes your mind. Barack Obama’s disregard for the U. S. Constitution and separation of powers makes him one of the most dangerous men to our nation and to freedom.