This is the face of a remorseless killer[1].:  On April 1, 16-year-old Simeon Adams shot a young father-to-be during a senseless robbery. (The victim, Nathan Trapuzzano, had only a $23 MP3 player and a wedding band on him.) When Adams appeared in court, this is what he looked like. 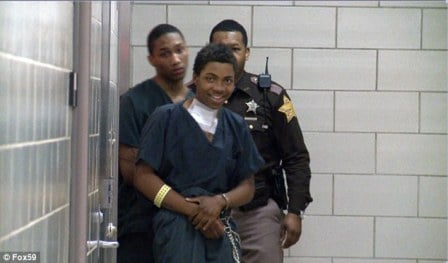 Who does he think he is, a hip-hop star grinning for the paparazzi?

Simeon Adams is facing a murder charge for the shooting death of 24-year-old computer programmer Nathan Trapuzzano as he took an early morning walk on April 1…Simeon Adams, known by the nickname ‘Red’, is alleged to have confessed to a friend that he shot Nathan Trapuzzano once in the stomach after the newlywed, who was expecting his first child, reached down to his shoes as Adams made him strip during the robbery.

Adams’ friend Marvell Robinson told detectives he was woken up by the alleged shooter on the morning of April 1 at his home in Indianapolis. Adams told him: ‘Man, the police is out here and they are looking for me.’

Trapuzzano, a 24-year-old software engineer, had been out for a morning walk at around 5am, when Adams and accomplice Martez ‘Duh-Duh’ McGraw allegedly targeted him.

In this case, the justice system had the good sense to charge Adams as an adult. I don’t care how young he is. Adams is beyond old enough to understand what he did, but not human enough to feel any guilt.
Also see: An Interview With Andrew Breitbart[3]
Endnotes: