It sounds like a plot from The Hunger Games: children chosen by self-appointed people of power who are mercilessly slaughtered while their parents are forced to watch — only this isn’t a story of fiction. It’s the real life pain of Ethiopian parents whose children are declared “mingi”, and cruelly killed. 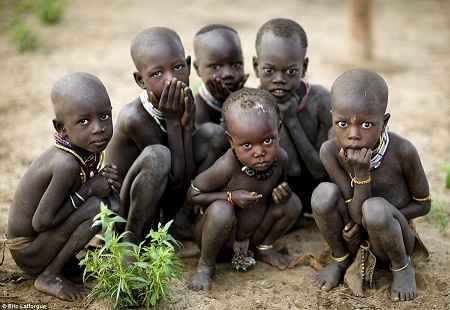 Buko Balguda, 45, from Duss, a Karo tribal village in southern Ethiopia’s Omo Valley, is alone. The reason? Her seven sons and eight daughters were all killed at birth by village elders who decided that the children were cursed.

‘I lost five plus five plus five babies – 15 in total,’ she explains. ‘I had seven males and eight females. During this time, our tribal traditions were very hard. I did not respect our traditions, so they killed my children.’

And Ms Balguda is not alone. The concept of ‘mingi’ or cursed children remains a tenet of tribal life for the Hamer and Bana people, with elders insisting that mingi infants are killed before they can bring the rest of the tribe bad luck.

As a result – and despite efforts by the Ethiopian government to ban the practice – cursed children are murdered every day, whether by being left alone to be eaten by hyenas, thrown to hungry crocodiles or simply starved to death in a locked hut.

… [I]llegitimacy isn’t the only reason for a child being declared ‘mingi’. Others are deemed cursed because of disabilities, because their parents didn’t get permission for a pregnancy from the elders, because they are a twin and most cruelly of all, because their teeth develop the wrong way.

… ‘Being declared mingi almost always means death of the child,’ he continues. ‘The tribe will leave the child alone in the bush without food and water or will throw the child in the middle of the river full of crocodiles.’

Although Ms Balguda wasn’t required to kill her own child, she was forced to stand and watch as elders carried her babies away to their deaths. ‘It was not me who killed the babies,’ she remembers. ‘It was other people from my village. I broke the rules of our community, so they killed my babies.’

There is nothing more heartbreaking or cruel than forcing a mother to watch her innocent, defenseless infant be murdered in such a horrific way. And though the Ethiopian government has declared the practice illegal, and organizations exist that will raise a mingi child away from the tribe, somehow this despicable practice of tribe-sanctioned murder is allowed to continue.