The Civilian Casualties Of Everyday Life Under Saddam

The Civilian Casualties Of Everyday Life Under Saddam: Without question, war is a cruel and terrible thing — especially for the innocent. Women, children, & men who never picked up a gun get caught up in the fighting and suffer horrible wounds[1], crippling injuries[2], or die by the houseful. That is a consequence of war and we should never ignore or forget about the people who get caught in the crossfire.

That being said, we also shouldn’t forget about the hell that Saddam put his people through 24 hours a day, 7 days a week, 365 days a year. Just look at this picture… 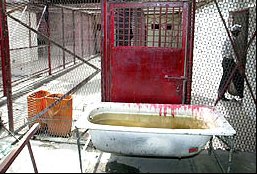 That’s from something called the “White Lion building[3]“. It is one of “20 or 30 torture chambers in” a “secret police HQ” in Basra.

Take another look at that tub and imagine what was done to people in it…over and over again. Of course, that wasn’t all they did in the “White Lion building”…

“They hung me by my wrists from a ceiling hook.

“They electrocuted me three times a day on my finger ends, which were cut with a knife. I am lucky – I survived.”

In nearby torture rooms were cages where Saddam’s butchers delivered beatings and metal baths in which victims were submerged before getting electric shocks.

Yousef Abd-Ali, 29, survived two years of brutality – again, for being a Shi’ite.

He said: “Every day they hit me with nylon cable, and used sticks to break my bones. They would slash my back with broken bottles.”

Dad-of-five Abid Hussan, 45, added: “Twice a day they beat me and hung me from a hook.”

How many torture chambers like this were there in Iraq? How many women were gang raped to “teach their husbands” a lesson? How many children languished in prison[4] because their parents displeased the regime? How many HUNDREDS OF THOUSANDS of Iraqis starved to death while Saddam spent his money on weapons, palaces, and private fun parks[5]?

Now all that being said, I’m tired of listening to people carp about civilian casualties in this war who never cared about how many people Saddam wiped out before we arrived on the scene. In fact, I find these people in the anti-war crowd who display this faux concern about Iraqi civilians to be sickeningly hypocritical. Did they ever show the slightest bit of concern when Saddam Hussein slaughtered the people of Iraq by the tens of thousands to hold onto power? Yet, when Coalition forces accidentally kill Iraqi civilians in an effort to liberate Iraq, the smallest fraction of the number that Saddam has, these same people feign outrage. They’re oh so concerned about the Iraqi people…as long as they can use them as a club to attack George Bush &/or America with. If Saddam Hussein would have somehow remained in power, the anti-war activists would have forgotten about the Iraqi people like they never existed — just like they did with Vietnamese once America left the scene. Maybe these people should think about how many Iraqi civilians would have died this year if they’d gotten their way and left the “Butcher of Baghdad” in power….