The only way to stop Putin’s Russia is by force, the rest is conversation

: The only way to stop Putin’s Russia is by force, the rest is conversation 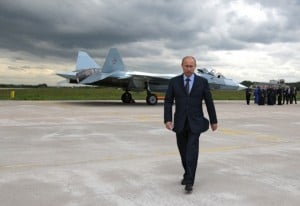 [1]As President Obama, John Kerry, and the rest of the West publicly condemn Vladimir Putin as he expends his territory into Crimea and perhaps beyond, Russia is getting bigger.:  China, Iran and North Korea aare paying close attention.:

If the West is not gonna put up any military resistance:  as:  they did in the early 20th century and again in the 1930s, don’t rest easy thinking Russia will stop at a certain point and not go further.:  That’s foolish Neville Chamberlain-type thinking.:

If the West refuses to defend itself before a threat becomes a bigger threat, then Putin will gladly keep taking.: :