Democrat Fred Phelps, who runs the Westboro Baptist Church, is thanking God for the Boston Marathon bombing and claiming that it’s punishment from God for homosexuality. The group is also promising to protest the funerals of people killed in the bombing. 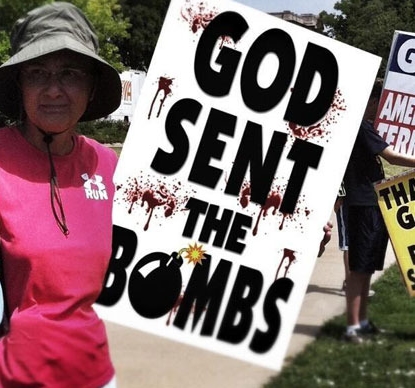 The Westboro Baptist Church Cult, which is largely made up of relatives of Fred Phelps, has protested a number of funerals in the past to gain attention including those of Matthew Shepard, Ronnie James Dio, Michael Jackson and Steve Jobs.

Although the group, like all Americans, has a right to free speech, it does not have a constitutional right to picket funerals. Just as cities can refuse to issue protest permits for residential neighborhoods at 4 AM, they CAN AND SHOULD refuse to allow the Westboro Baptist Church to protest funerals. In America we have a First Amendment right to say what we want, but we have no right to use someone else’s funeral as a platform to get our message out.