This IS A War Against Taxes, One of Our Tea Party Generals Has Died At 43

Make no mistake that the Tea Party movement IS a war against taxes. This is a money war. There is a power struggle right now about who gets control of the money. The government or the people. This war between these two entities has had some standout leaders.: This morning we got some very bad news, one of our leaders has fallen.

Waking up in NYC I got a call from Joe the Plumber that Andrew Breitbart died. I told him that surely it was a stunt. After a bit of convincing I realized that it wasn’t. My first run in with Breitbart was in Searchlight, NV. Breitbart leading our TPX buses like stallions galloping to the backyard of Harry Reid.

It is now interesting to look back and see how many fights this General was in the lead. Just 1 year I happened to run into Breitbart again outside the Koch convention in Palm Springs, CA where there was a clash of people upset that wealthy people who employ the nation have the gall to meet together and discuss how to preserve prosperity in this country. There again was General Breitbart already leading the charge against the beginnings of the Occupy Wall Street mentality.

… General Breitbart was always real, was always in your face, was always seeking the truth. I hope that this event will draw all of us together in the movement as we realize… this isn’t a fight to have the biggest, best Tea Party. This IS A WAR Against taxes and the intrusiveness of Government. Andrew knew that, he fought to his dying breath for you, for me, for his wife and children.

Let’s all carry the torch forward and look to our other Tea Party Generals like Herman Cain and Sarah Palin. We cannot shirk our duty, the call of freedom is ringing and we must push forward! 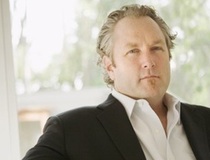