Thug congressman gets away with a crime: No criminal charges for Rep. Michael Grimm 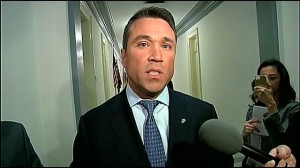 [1]I’ve documented that Rep. Michael Grimm committed the crime of assault[2] by just threatening NYI reporter Michael Scotto.:  The video evidence proves it and the D.C. district attorney should prosecute Grimm.:  But, for some reason the authorities don’t want to pursue the case.:  So despite video evidence of the crime, Grimm gets away with it.:  So I predict he is going to be more embolden to act stupid.:  So next time when this out of control congressman really hurts somebody, remember this day.:

My Fox[3]reports law enforcement will not bring criminal charges against Rep. Michael Grimm, R-N.Y., for threatening to do bodily harm to a reporter, according to a police official.

“Consistent with our law enforcement responsibilities, we looked into the event, determined there isn’t a complainant and have closed the matter,” Shennell Antrobus, a spokesman for the U.S. Capitol Police, said in a statement.

The confrontation occurred on a balcony in the U.S. Capitol following the president’s State of the Union address Tuesday night.

Grimm, who represents Staten Island and part of Brooklyn, walked out of an interview with cable news station NY1 when reporter Michael Scotto tried to throw in a last question about a long-running FBI investigation into his campaign finances.

After Scotto finished his report, Grimm stormed back, leaned into Scotto and said, “Let me be clear to you. If you ever do that to me again, I’ll throw you off this (expletive) balcony.”

Scotto protested, saying he was asking “a valid question.”

“He lost his temper. I was the United States Attorney and if someone came to me with a case like this they wanted to investigate I’d throw them out of my office,” Giuliani said. “First off all, he didn’t touch him… Federal crimes are killing people, selling drugs, organized crime, massive frauds. To use the resources of the federal government for this kind of stuff gives it the suggestion, the appearance that it’s being politically motivated. The Attorney General should be careful not to have that appearance out there.”

Who says this was a Federal crime?:  Giuliani is way off base.:  Grimm committed assault by “threatening” to throw Scotto off the balcony.: :  He doesn’t have to touch him.:  The political class are obviously held to a different.:

: Originally posted at The Last Tradition[5]