Well, I’m sure he can look the other way on that[1]. It’s not like the guy is a Republican, or something: 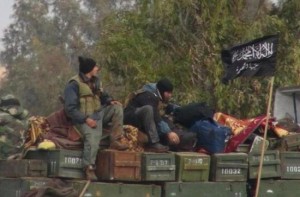 A top official of a major Syrian rebel group acknowledged Friday that he considers himself a member of al Qaida, an admission that undercuts Western hopes that the new Islamic Front would prove to be an acceptable counter to the rising influence of other al Qaida affiliates in Syria.

Abu Khaled al Suri, who is a top figure in the rebel group Ahrar al Sham, made the statement in an Internet posting in which he argued that the Islamic State of Iraq and Syria, another radical rebel group, was not al Qaida’s representative in Syria and was not doing the work of al Qaida’s founder, Osama bin Laden, its current leader, Ayman al Zawahiri, or al Qaida’s late leader in Iraq, Abu Musab al Zarqawi, who was killed by an American missile in 2006.

Ahrar al Sham is one of the most militarily effective groups fighting to topple the regime of President Bashar Assad and is one of the largest groups aligned with the Islamic Front, a coalition of rebel groups that announced its formation in September as a counter to the U.S.-backed Supreme Military Council. Ahrar al Sham’s leader, Hassan Aboud, is the political chief of the Islamic Front.

“Suri’s prominence in Ahrar al Sham and his public statement praising Zarqawi and Zawahiri will make it very difficult for the U.S. administration not to designate Ahrar,” said Will McCants, the director of the Brookings Institution’s Project on U.S.-Islamic World Relations and an adjunct professor at Johns Hopkins University. “If Ahrar is designated, it will be hard for (aid groups) to move humanitarian aid through the country since they control large swathes of it. The designation will also put the U.S. at odds with Qatar, Ahrar’s main state sponsor.”

See also: : Dems On MLK Day: Vote Is Precious, So Let’s Not Verify That Someone Is Eligible: