California policies have been chasing business away from the state for years so although it shocked some people in local government that Toyota was enticed away by Texas, most thinking citizens of California are not surprised.[1] 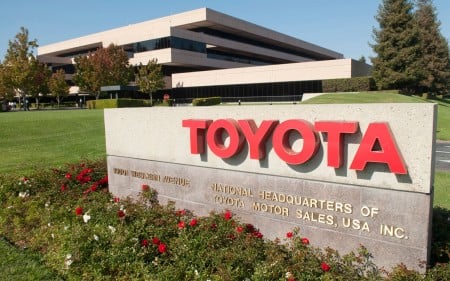 The world’s leading automotive maker will follow the lead of its competitors and other large businesses, and leave California for better business climates elsewhere. Toyota had its US headquarters in Torrance for more than three decades, but now nearly 5,000 jobs will shift to Texas:

Toyota Motor Corp. plans to move large numbers of jobs from its sales and marketing headquarters in Torrance to suburban Dallas, according to a person familiar with the automaker’s plans. …

The automaker won’t be the first big company Texas has poached from California.

Occidental Petroleum Corp. said in February that it was relocating from Los Angeles to Houston, making it one of around 60 companies that have moved to Texas since July 2012, according to Texas Gov. Rick Perry.

Perry last month visited the California to recruit companies. The group Americans for Economic Freedom also recently launched a $300,000 advertising campaign in which Perry contends 50 California companies have plans to expand or relocate in Texas because it offers a better business climate.

Like these other companies, Toyota could also save money in an environment of lower business taxes, real estate prices and cost of living.

Torrance mayor Frank Scotto said he was blindsided by the decision, although he knew Toyota planned a major announcement for today. KCAL-9 reported on the move last night:

California will change their policies and friendliness toward business after the businesses have left. Even New York is getting in the mix and has been wooing the gem of California, Silicon Valley corps like Facebook who employs over 300 people in New York, 100 of whom are engineers and Google who employs 3,600 people in the city, more than half of whom are engineers.Other Bay Area heavyweights who have set up shop are Twitter, Pinterest, Dropbox, eBay and Yelp have also opened offices in New York. It Appears that California is too involved in growing their greatest commerce to pay attention, big Government.