An investigative piece: by an NBC station in southwest: Florida shows that illegal immigrants vote regularly. [1] 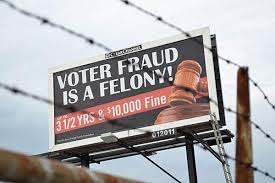 I doubt this will capture the attention of the Obama administration, which is clearly more interested in the non-existent problem of “vote suppression.”

The reporter spent about two months digging around the voter rolls in the two counties and the discoveries are dumbfounding.

In that short time, more than 100 people registered to vote in those two areas were proven to be ineligible by the reporter. A Cape Coral woman, eligible to vote in elections, was tracked down through jury excusal forms that verify she’s not a U.S. citizen. A Naples woman, who is not a U.S. citizen either, voted six times in 11 years without being detected by authorities. A Jamaican man is also registered to vote though he’s not eligible. The reporter obtained his 2007 voter registration form, which shows the Jamaican man claims to be a U.S. citizen. Problem is, no one bothers checking to see if applicants are being truthful.

Meanwhile, the Obama Justice Department is targeting Florida for purging ineligible voters from the roles. Gee, I wonder why Democrats want felons and illegal aliens to vote?

Also see: 12 Unspoken Rules for Being a Liberal[3]